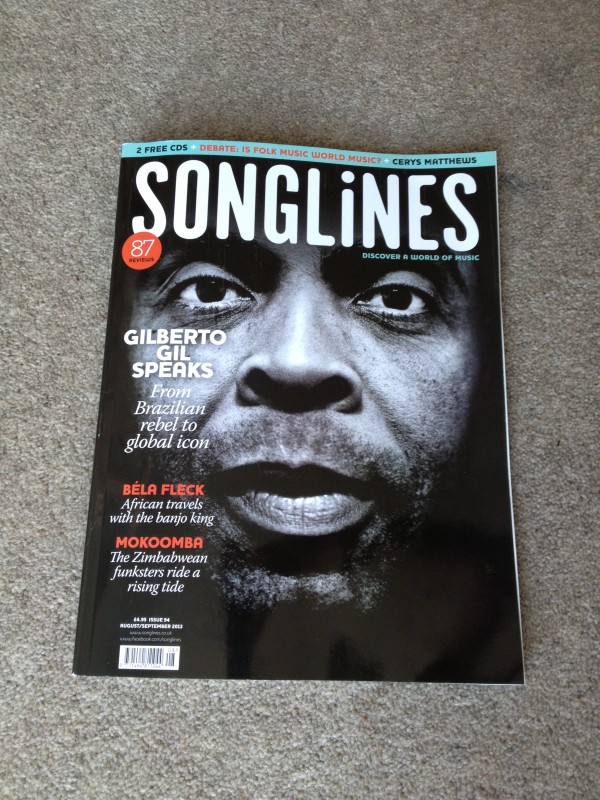 Songlines just arrived through the post after hearing that the August/September Issue 94 is out this week. With great anticipation I opened the package and immediately sought out the “Top of the World” editor’s pick complementary CD. This is a selection of the top 10 tracks from the new albums reviewed in each issue. I tried not to get my hopes up for fear of disappointment, which was impossible to avoid. Ambush was nowhere to be seen.  As I started to scramble looking for the review, bang! there it was our full page advert by Mish from MishFit in your face on the inside back cover. We knew we had a full-page but not where it would be placed. Hurray! Next came the review. Yikes! OK, just to put things into perspective, the Top of the World pick must have a balance of World Music, not only Africa, so there are few slots to fill and we are competing with the likes of Jupiter & Okwess International (who made it on the CD) who I saw on my Atlantic Music Expo in Cape Verde in May this year. They are awesome, fun and a tight original act. Well worth seeing. So I am already making myself feel better before I even read the review in the knowledge of the fact that we even got a review in the first place! Songlines are a highly respected and internationally read world music magazine by both music consumers and industry professionals and they receive literally hundreds of new albums every week.  They have 20,000 worldwide subscribers, are sold in main high street news agents and this is the issue they take to WOMAD and other festivals the UK this year. 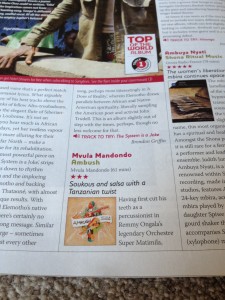 So, here we go: Three stars, titled: “Soukous and Salsa with a Tanzanian twist.” Well, I purposefully tried to steer away from soukous and the really commercial rumba you hear all over the place now but it obviously came through on ‘Banzayangu Hinonge’ and ‘Mwajuma Mambo’ – ironic that these are both many people’s favourites, so I wasn’t too happy to read that the “soukous-laden tracks end up feeling somewhat unoriginal”.  Bear in mind that these journalists are discerning world listeners and have literally heard it all.  I was very happy to read that “the salsa inspired pieces are among the albums best listening.”  I admit the Franco influence on ‘Mwajuma Mambo’ but am so pleased that ‘Tsunami’ has been picked up as a highlight.  What is even more exciting is that they have suggested ‘Hinongo’ as the track to try stating “the band are at their best when the Tanzanian roots shine through most clearly. This is illustrated on probably the most effective track on the album, ‘Hinongo’. The piece is based around Kanda’s ilimba (thumb piano) and features traditional style vocals in the ancient language of Kizalam set to a fast and funky reggae backing and Shearer’s bass and drums.”

This is the most complementary thing I have heard and I am really happy that this song has been picked out. I know it had a big potential and when we used to play it live as a duo with me on cajón I always felt that it needed a heavy bass and drum backing. In the studio we laid down the thumb piano track and actually initially had the beat on the other side, which was the ‘normal’ way we played it or I had been feeling it. This is a very common phenomena in African music that percussionists in particular will be very familiar with. The ‘beat’ can be flipped and inverted and felt in many places, sometimes right and sometimes wrong. This can be very frustrating and inflicts African musicians just as much if the music is an unfamiliar form.  Something wasn’t sitting right and I couldn’t come up with the right bass line.  Then I had the idea to flip it and play on what I was then feeling as the up beat. On checking with Saidi it was, in fact, the downbeat after all!  ‘Hinongo’ had two versions and for a while what became the final version was know as ‘Hinongo – The Other Side’.  It was a really exciting breakthrough and is one of Saidi’s favourite songs on the album.  The rest is my editing and mixing secret.  After the masters came through from Tom Leader, we could really hear the power of the track and Saidi was listening to it every night before sleeping saying that it “blows up his mind, every time”.  I can really visualise it going down in a reggae club and have yet to hear it on a full sound system. Drum n Bass and Dubstep DJs listen out!

The summary of the review in Songlines by Jim Hickson is “Ambush isn’t perfect, but it includes some gems and is a very promising debut.”

Thumbs up and pat on the back all-round, I say. Much to gleam and build on out of this constructive feedback.

You can be the first one to leave a comment.